Get your Week 2 NFL DFS picks from three pricing tiers so you’re covered whether you need a big spend-up stud or a value play.

We’re onto Week 2 with more NFL DFS plays and values! Most of our top-tier plays paid off in a major way last week, with Patrick Mahomes and Lamar Jackson setting the pace for much of the slate. 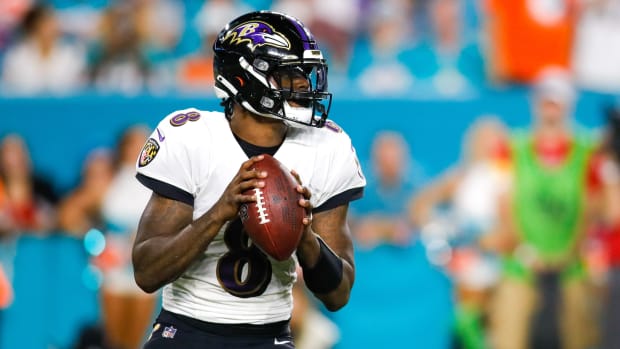 Justin Jefferson and Michael Pittman were worth the spend-up, while Jalen Hurts, AJ Dillon, Christian Kirk and Zach Ertz returned a ton of value for their salaries.

Once again, I’ve divided this week’s players into three pricing tiers. I’ll be sharing my favorite spend-ups and value options to mix in to get your NFL DFS lineups just right for the main slate.

He’s back! Barkley had 194 all-purpose yards and a touchdown last week, and this week he gets a Panthers defense that surrendered 187 yards and two TDs while allowing an 83.5% catch rate to Browns running backs in Week 1.

Russell Wilson passed for the third-most yards in Week 1 while also having the 11th-best completion rate and 11th-best passer rating, despite losing to the Seahawks.

In his second week vs. Houston, we will see him open up even more. No boos ought to help. What else ought to help? A Houston defense that surrendered the second-most passing yards in a Week 1 to Matt Ryan.

With Jeudy, Sutton and Javonte Williams as excellent receiving weapons, Russ should be able to put up a nice day.